Photo by Studio 7042 on Pexels.com

For many years, I was one who thrived on multitude. If I loved a piece of clothing, I’d buy it in every color, sometimes even in multiple sizes (because hello, my weight fluctuates), and store it for what seemed like years. If Target had a 70% off clearance section, I would ravenously explore it and leave with half the inventory, because it was on sale. I’ve tried to analyze the reasons why I was likely to do so, and have realized that for some time, my income was so limited (thanks, grad school, postdoc, and daycare tuition!!), that when something went on sale, I felt like I had to have it, and as I mentioned, sometimes in multiples. I would also keep every single I owned for years, largely because I wasn’t sure whether I would be able to buy something to replace it later. Thus, clutter ensued. As time went on, I had kids, life got busier, and the enormous quantity of stuff that I owed became overwhelming. It caused chaos, lack of organization, and truly, became a source of anxiety.

Over the course of the past two years, I have slowly purged many of the rooms in our small-ish house. The purge was largely driven by our kitchen remodel and the need to displace kitchen items for storage in other places throughout the house. When those spaces were limited, I began to purge.

Today, a large majority of our house has been purged and streamlined. I recently worked on a closet that was overflowing and thanks to the magic of ziplock storage bags, is now a functional closet with space for guests.

This past weekend, I took 5 large bags (think blue, Ikea large bags) to consign. Several items were accepted, so I am now $200 richer and the owner of 40 or so fewer items. My last project focused on the kids’ room, and their room too, is now a bit more organized thanks to the magic of Closetmaid and their cube-organizers!

I have four major projects left on my list: our master bedroom, a closet in our basement (current catch-all), our garage, and my cloffice. My cloffice started as a blank slate, but with the busy-ness of the year, became full of un-edited clothing, shoes, etc. My goal is to take it from this: 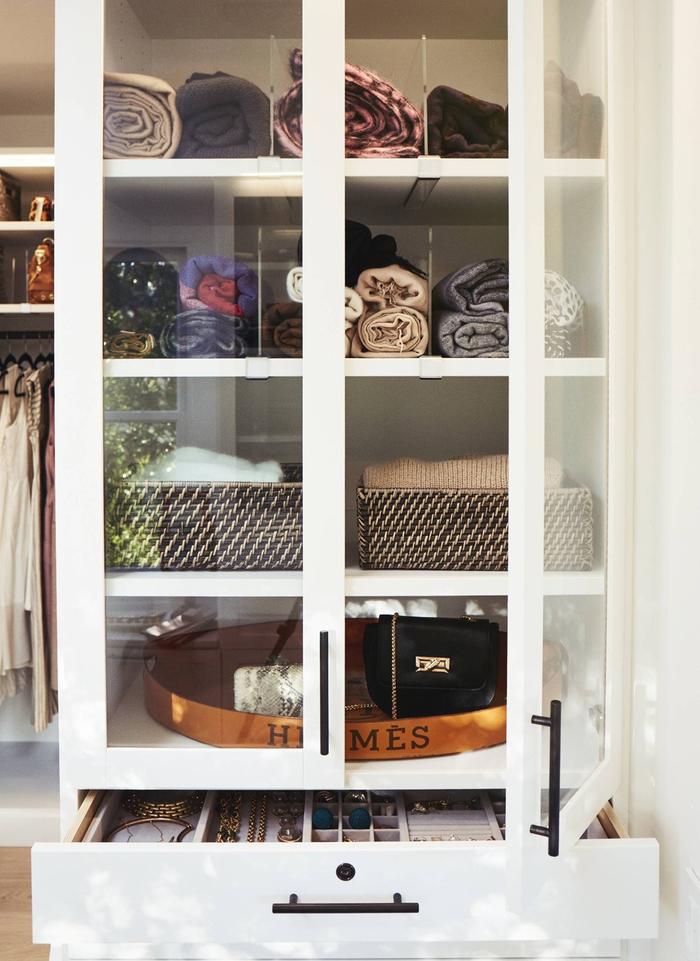 While this ultimately requires a more monochromatic wardrobe, not achievable in my life, what I love about it is the seemingly sparseness of items, the uniformity in use of hangers, and ultimately, the way the items are staged, such that the characteristics that generate “joy” – to quote Marie Kondo of The Magic Art of Tidying Up – are highlighted and featured prominently.

I plan to give myself until the end of the year to accomplish the editing of all four rooms, but am excited to get started! Do you have any streamlining/editing projects you’re currently working on? If so, what are some strategies you are using to implement the process? Looking for any tips or suggestions as I start these next projects!

This is 44. No filter (yep, that means no Botox or fillers, though I have thought about it!). No idea how it all went so fast, but in gratitude for a lifetime of memories and a lifetime yet to be lived. I have the wrinkles and age spots to prove it. ❤️
9 yr old feeling back to his normal, healthy self called for a trip to the farmers market! 🥬🥦🌽🍅
Sometimes self care looks like this.💇🏽‍♀️💆🏽‍♀️

Some of the pieces I wear and products I mention are linked to exact or similar pieces online. Some of these links are affiliate links, which means, I may make a few cents when you click on the link. Otherwise, my posts will each include specific disclosures if the post has been sponsored by a company or brand (usually at the top of the post). Thanks for reading and for your support!